Women Writing Women investigates why muntali or rattan weavers of Banaue, Ifugao are migrating to Baguio or Itogon to be plumbers, carpenters or small-scale miners shelving their traditional craft

Soling Balingit, 60, is an artisan who follows the path of the muntali (traditional rattan weaver), a craft she abandoned 12 years ago. Her husband was a wood carver and at one time, the greatest rattan picker in the forests of Cambulo, a village in Banaue, Ifugao.  But weaver and carver shelved their art to migrate because someone told them carpentry and plumbing in Baguio City and mining in Itogon were weightier currency to school their five kids.

Cutting and harvesting of timber in natural and residual forests was fully banned in 2011 under Executive Order (E.O.) No. 23 to protect the country’s rapidly declining forest cover. A 2013 memorandum on exemptions to E.O. 23 somewhat eased the tight supply of wood by allowing two woodcarving organizations in Ifugao to sustainably cut trees and transport wood products subject to strict regulation by the Environment Department. 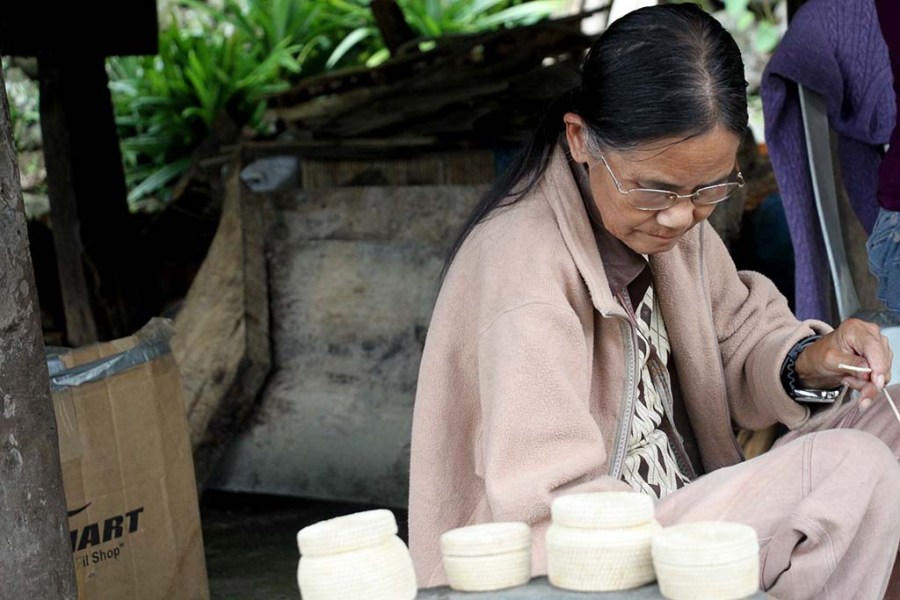 Soling Balingit, a muntali (rattan weaver) of Banaue, Ifugao, weaves smaller pieces  which she says are more salable to tourists.

It wasn’t the dwindling wood supply that induced the family’s migratory itch though. Soling’s brood caught the fever that enthralled Banaue’s artisans since post-World War II—wood carvers and muntali especially—in an exodus to carve new markets or new crafts in shaping furniture, chiseling at rock with the promise of gold dust and weaving the narrative of migrants.

In Baguio, the wood carver joined a contractor making pipes and installing toilets, and moonlighted as a carpenter. The weaver hired herself out as utility worker, fingers wringing laundry on the side.

Her husband could have been a miner, too, Soling remembers, if he did not find gentler work for his artist’s hands. He passed away five years before the September 2018 landslide in Itogon, Benguet where many farmers, wood carvers and weavers from Ifugao­—who gave up farms and craft to become small-scale miners—died. 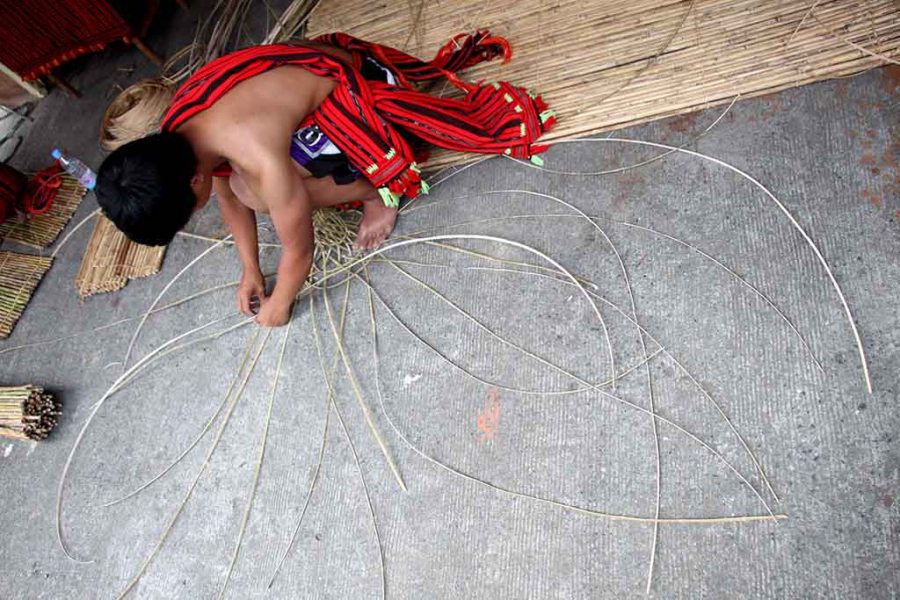 Young people are taking up traditional tali in Banaue, Ifugao but the supply of rattan is fast dwindling.

Soling shifts between being defensive and sad. Her husband died a carpenter and a plumber.  His portfolio of new creations shifted from the busts of warriors and elders, traditional bulul (rice guardian) and decorative shields that used to fill his workshop to sinks, bath tubs and shelves.

Sure, she says, there was pride in carving bulul, warriors, eagles—representations of power extended to the artisan, and there was gratification in weaving urgong (rice baskets) and riga-o (flat basket for winnowing rice)— demonstrations of the weaver’s art in everyday utility.  But we couldn’t eat pride and gratification, Soling says, as it was easier to earn money in Itogon and Baguio, five hours away from home, than Banaue. She later reconsiders, and says, it was also easier to lose money there.

When her husband died, Soling had to double up her income and survive in the city through her wits and fingers, but the rattan she needed was too expensive and was quickly becoming rarer than gold panned in Itogon’s rivers. Her expenses erased her profit though she was supplying a big souvenirs stall in Maharlika, a mall-like complex favored by tourists for its proximity to the city market, whose owner was a friend and a fan of her woven knick knacks. 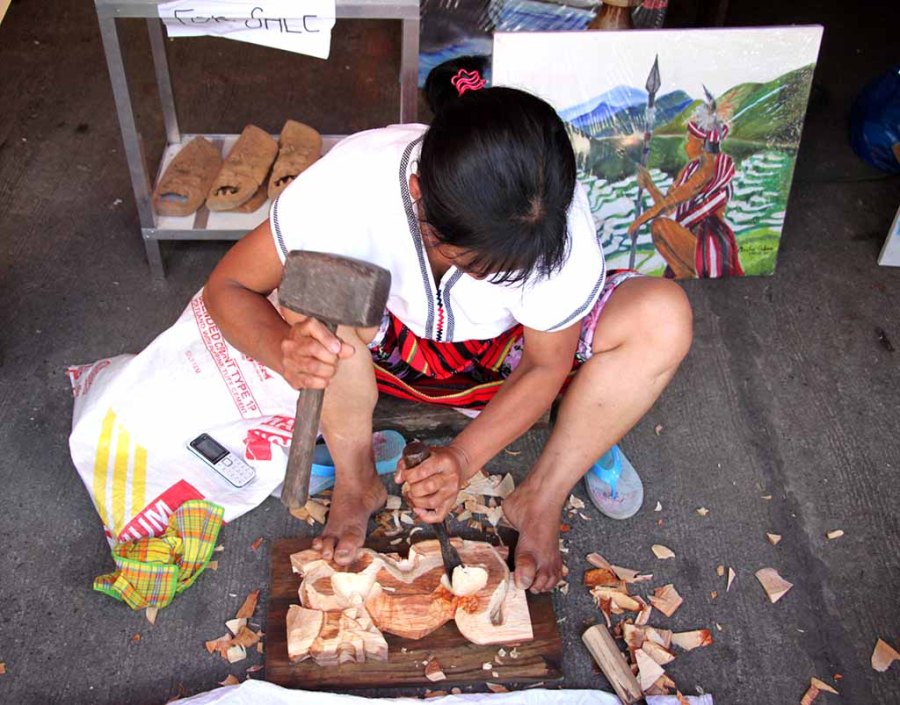 When her kids all married, Soling came home to Bocos, a village near Banaue’s Poblacion, and her fingers remembered.  The traditional art of rattan weaving was not passed on to her by an elder or a teacher. It was 1974 when she wove her first basket, and a roll of rattan then was only PhP34 (less than US$1) and plentiful, compared to the PhP170 (around US$3) she pays for it now from a supplier in the local market when it was available.

She couldn’t remember how much she paid for that first rice basket that she disassembled to learn the coring, the coiling, the locking.  She met her husband because she wanted to save capital and harvest the rattan herself.  The other girls could naturally clamber up, Soling remembers, but deft as her fingers were, her legs shook too much to hoist her up the trees to harvest the best vines. But this particular guy could, she giggles, and he offered to pick rattan to her heart’s and fingers’ content.

“Narigat chi mun-uwa” (It was hard to process the rattan), Soling says, but she experimented how to soften the vines, dry them and get them ready for weaving. Locals preferred her rice baskets and pasiking (backpack) because, she jokes, they could even use them to hold water, tightly woven as they were.

Like many Ifugao who mark their lives with seasons, Soling pinpoints the time when she realized that rattan weaving is threatened with the scarcity of supply. Weeks after typhoon Yolanda (Haiyan) which hit the country in 2013, she remembers that there were no rattan even on Saturday market days in Banaue when locals would bring their farm and forest harvests. 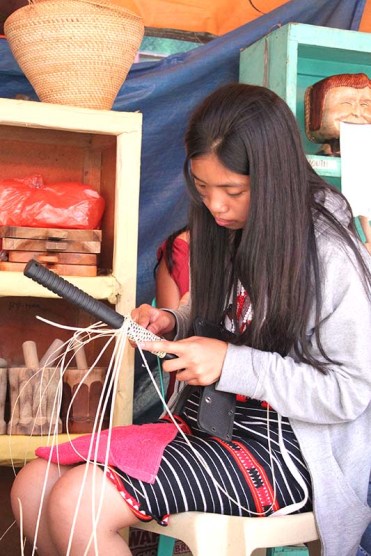 Aside from weaving small jewelry cases, muntali decorates handles and sheaths of knives

There is hardly anyone to harvest rattan now because they have to go farther and deeper in the mountains, she laments. If she waits for the irregular supply in the market, she can only weave smaller pieces. But Soling sees the philosophy in the weird balance: her main customers are Banaue tourists now, she muses, so the more salable products are cute containers and little sling bags that she can quickly finish in an hour or two. Locals still order her urgung and pasiking but delivery date is dependent on supply.

During the Imbayah and other festivals, Soling gets windfalls. She sells directly to tourists earning PhP150 (US$3) for every small, round jewelry case. Her workshop is mobile as she finds a corner or a pavement where her fingers busily weave, and here she unwittingly attracts photographers of all kinds who spot the artisan. She colors their pictures with momma (betel nut)-colored teeth.

The tourists leave with a piece of woven rattan with Soling’s signature left in a loop only she can spot. Wood carving is picking up in Banaue for the little native huts, sunflower masks and round fuung (ornaments popularly called “fertility pendants”).  Many of the artisans do not care to leave their marks on the little touristy trinkets anymore.  The carvers of old did, especially for the bigger sculptures. 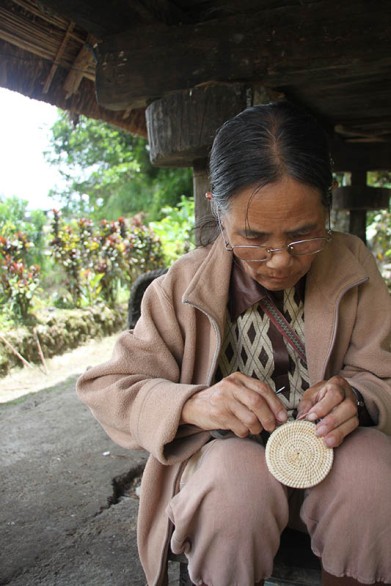 Soling Balingit puts in the final loop to “sign” her masterpiece.

The Ifugao artisan’s signature is there somewhere. Between the tiles maybe, in obscure cracks filled with grout where no one would really think of looking unless a hang-over catches a victim in one of the toilets of one of Baguio’s bigger malls, and there is no choice but to stare at the floor and bowl spilling guts and swearing no-more-alcohol.

And if mall goers using the toilets in Baguio are mindful enough, they can probably hunt for the signatures that migrant artisans left behind.

Bugan Ni-Rosipan (a nom de plume) is a feature writer and multimedia artist, a hiker and cyclist, a mystic and witch.